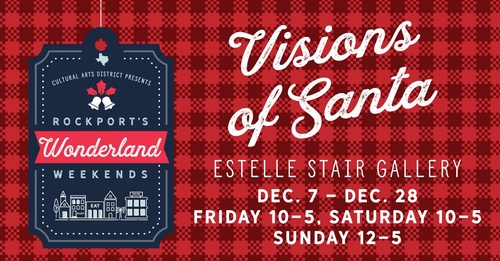 What began as an explanation about an art method has become an annual Texas Christmas tradition. In 1974 Billy L. Keen was demonstrating to a co-worker how the Old Master painters used a method called "underpainting" to achieve flesh tones.

Because the season was Christmas, Keen decided to use Santa as the subject of the demonstration, then hung the painting in the room for his one-year-old son. The following year he painted a new Santa for his second son. By the third year, it seemed like "a neat thing to do." Since then, it's become a tradition.
Location:
Downtown Rockport
Austin St.
Date/Time Information:
December 7th - 28th
Every Friday & Saturday 10 to 5 pm
Sunday 12 pm - 5 pm
Contact Information:
Hannah Miller
Send an Email
Fees/Admission:
Free
Set a Reminder:
Business Directory Events Calendar Hot Deals Member To Member Deals Job Postings Contact Us Join The Chamber