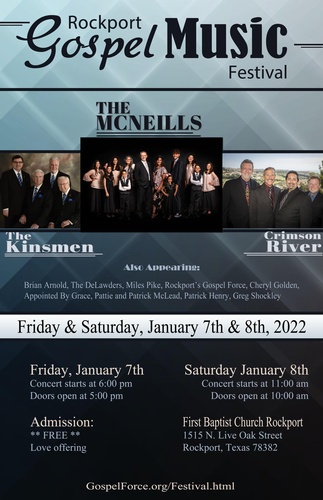 Featured Performances will be: The McNeill's, Crimson River, and The Kinsmen. More performances also appearing throughout the weekend will be Brian Arnold, The DeLawders, Miles Pike, Cheryl Golden, Appointed by grace, Pattie and Patrick McLead, Patrick Henry, Greg Shockley, and Rockport's very own Gospel Force.

Rockport's Gospel Force quartet has performed over 1,000 concerts since 1994 in Rockport and a number of other Texas cities including Wimberley, Freer, San Antonio, Bryan, Refugio, Victoria, Sinton, George West, Goliad, Portland, Beeville, Waxahachie, Red Oak, Henderson, Cedar Park, Beaumont, South Padre Island and Corpus Christi. The quartet was invited to sing at the state capital in Austin in March of 1997 and February of 1999, and February 2001 for Aransas County Day.

The Quartet has released four recordings: "The Next Time He Comes", "I've Got a Mansion", "And Cried Holy", and the fourth titled "We Shall See Jesus". The Gospel Music Festival begins on Friday, Jan. 7 with doors opening at 5pm and concert starting at 6 pm and Saturday, Jan. 8, doors open at 10am with concert starting at 11 am. Admission is free with a Love offering

Visit the website at http://www.gospelforce.org/ for complete schedule and times. For Information on Rockport-Fulton, Visit www.rockport-fulton.org 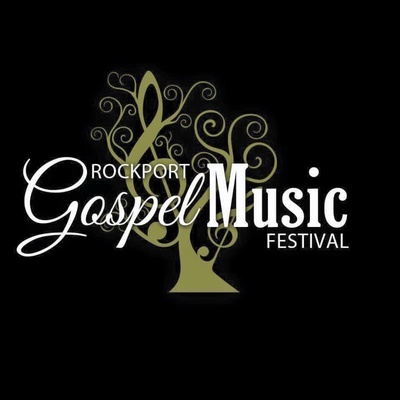